Our roving Wi-Fi reporter, Klaus Ernst, has checked out the Times Square area again looking for CBSMobileZone hotspots that were online (though barely functional) a few months ago. Here’s his report:

when trying to connect at a CBSMobileZone lately I keep getting redirected to:

no aptilo terms of service page coming up. Also the “cbsmobilezone.com” Website is gone. Could be accessed from anywhere not just their hotspots.

Right by CBS on Sixth Av I caught a good one: upper case and lower case. Was always like that. My guess is that the lower case was their tryout and they never corrected it.

The last time I was able to connect to CBSMobileZone was on Nov. 28 (Subway entrance 7th Av and 53 St) I checked the stats from an email I sent from there. The hotspots have definitely something to do with Verizon:

So is CBSMobileZone history? Have you heard anything?

So, has anyone heard anything about CBSMobileZone? Is it in fact quietly shut down?

Our own Klaus Ernst had a chance to check out the new Times Square Wi-Fi network, and snapped some pictures of the network’s home page (on his iPod Touch) and some of the advertisements in the area:

I finally got connected at 43 and b’way. I tried saturday – no luck. No good at the steps either. Could this be new CBSmobilezone?

We don’t know of anyone that was able to get the CBSMobileZone network to work. Hopefully the quality and range of the Times Square Wi-Fi network improve. 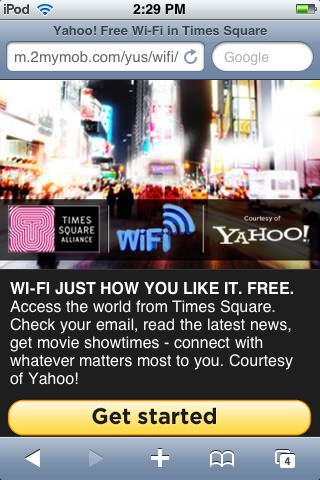 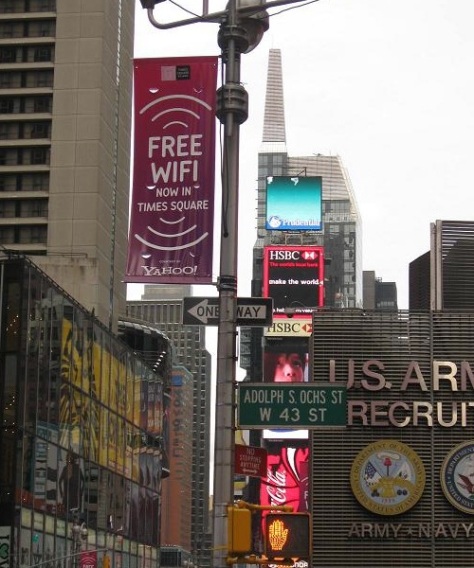 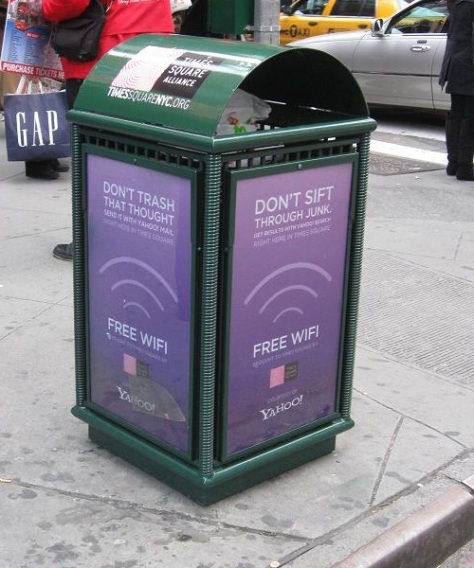 Our own Klaus Ernst (he’s an active NYCwireless member) reports on some of availability of the CBS MobileZone on Wi-Fi Net News.

The 47th Street Subway entrance has the “CBS mobile ((ZONE)) surf the web here. Free!” orange banner (see picture) but there was no hotspot. Maybe next time.

Well, it’s not hopeless, but CBS is definitely not blanketing the area with Wi-Fi the way they made it sound in the press release.

Craig Plunkett also reports on his blog about the network:

I was in the Big Town yesterday and decided to try getting access through my blackberry from a Wi-Fi node next to a billboard that I could clearly see. 3 bars on the blackberry wifi meter, but no joy. For some reason, my blackberry coughed up a W010 failure to associate message. The node in question is on the southwest corner of 40th and 7th avenue, at a cell site/billboard on top of a 3 story building.

For those not in the business, the business end of this connection is the white box with the three antennae above the all-seeing CBS eye. The two long antennae are the stock dipoles that come with a Tropos 3200 node. That’s what your wifi device connects to. The third white little can in between the two long ones I thought might have been an EV-DO antenna that is commented upon in Glenn’s wifinetnews post here. However, a person connected with the project has quashed that notion adamantly, and upon closer inspection of the picture, it’s just the top of the mounting mast sticking up over the Tropos node. Notice the cell site antennae below the CBS sign. Usually, there’s fiber to these cell sites, and that might be what the site is using for backhaul. I’m not really buying John’s explanation of the connection issues. I haven’t ever had to do the kinds of on/off gyrations he’s describing to get connected, whether it was a blackberry, XP, or Vista laptop, and if you have to screw around that much with your adapter just to get connected, then nobody’s going to use it.

Craig’s right that if the connection isn’t going to work well given the RF interference from all the other Wi-Fi, there’s likely to be little use. Its not clear that CBS has learned from earlier experiences from Verizon’s ill fated Wi-Fi push a few years ago that having Wi-Fi on a street corner means nothing if there’s no easy way to use it with your laptop.

One important aspect of Free Wi-Fi networks is that to be useful, they must be in locations that have seating available, and there’s very little seating available on the streets of midtown Manhattan. Both Klaus and Craig are Wi-Fi early adopters, and happen to have handheld devices, but very few people in the general population are so lucky. In reality, if the connectivity isn’t better than dial-up for any user, there’s little point to using the network on a Wi-Fi equipped phone like the iPhone or Blackberry, since the cell networks are going to be about as fast and the Wi-Fi connection.

The Tropos gear uses 802.11g Wi-Fi gear to distribute internet access to the nodes, but this only makes the problem of Wi-Fi interference worse. In midtown, you can usually see dozens of access points, and that’s just the ones that are broadcasting their SSID. The Tropos backhaul likely experiences lots of radio congestion on the omni-directional antennas it uses, and only serves to increase the amount of Wi-Fi noise broadcast into the area.

Have any other NYCwireless users used the network?

NYCwireless is a non-profit organization that advocates and enables the growth of free, public wireless Internet access in parks, public spaces, and affordable housing residences in New York City and surrounding areas.

If you are interested in building a free Wi-Fi hotspot in your business, park, or housing development, contact us.